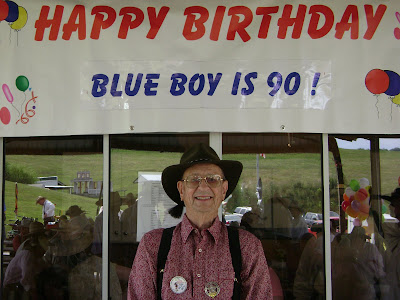 49 Cowboys and Cowgirls had the pleasure of helping Blue Boy celebrate his 90th birthday during our July 4th Match.
Buxom Boo, Cody Kid, Lady Banker and Fort Knox hosted a nice celebration during our lunch break.
Cody Kid told us Blue Boy SASS 46773 started Cowboy Action Shooting in 2002.
Buxom Boo presented Blue Boy with a certificate from SASS recognizing him as the oldest active SASS competitor.
Will Reilly presented a plaque for his achievement from The Wartrace Regulators.
Charlie Bowdre presented him with the flag that has been flown over the range at every match since he became a Wartrace Regulator.
Lady Banker gave him a birthday cake and she and Boo passed out cupcakes for us all to enjoy.

Blue Boy shoots at most of our monthly matches and The State Championship. He occasionally travels , with his son Imis Twohofon SASS 46646 to other matches.
Blue Boy shot clay target sports with The Nashville Gun Club for about 30 years before discovering Cowboy Action Shooting. He said CAS was much more fun, anyone who shoots CAS knows it's more fun than any other shooting sport.
Blue Boy's father gave him his first gun when he was 10, so he's been shooting for about 80 years and hopes to be shooting for many more.

Blue Boy is a Great person and an inspiration to us all and I hope we can all get together again and celebrate his 100th birthday at the range as well.

49 shooters came and braved a hot 4th of July to compete in our main month shoot and help celebrate Blue Boy's 90th birthday.
Whiskey again had some good stages and I proved you can get a "P" even on a good stage.
The top 5 shooters were, Buck Dodgers, Will Reilly, Papa Dave, Iron Maiden and Duck River.

Thanks to everyone who helps out putting on these matches and a special thank you to Sassy Lora, Annie Marlin and Shotgun Schoolmarm for doing the registration and scoring.