It has been a long cold Winter and God Blessed us with a beautiful day, and 67 Cowboys and Cowgirls took advantage of it. We had cowboys from Kentucky, Alabama, Mississippi and a few of our East Tennessee pards joined us in a day of trying to keep Blue Boy out of trouble.


Before the Safety Meeting Papa Dave gave out Award Certificates from our last match. I gave out a special Award to the Wartrace Regulator who shot the most "Clean Matches" in 2010. That Award went to Deadwood Miner. When I started searching the match results to see who our winner was, I discovered that I had "O" Clean Matches at Wartrace in 2010, so far 2011 is not looking any better. 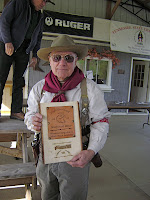 After the Awards were finished Papa Dave had a brief Safety Meeting and Sergeant Shooter offered a prayer and led us in the Pledge.


Whiskey wrote some fun and fast stages including the Corral with a rifle and a pistol knock down as well as a clay bird to shoot. We also shot the Line Shack, Cemetery, Livery Stable and Fort Sweeney. We had 4 posses, I was on posse 2 and I have to thank everyone for making our posse so much fun. Everyone worked and made for a smooth running posse. We had the pleasure of having 2 East Tennessee Gunfighters on our posse, we don't have many Gunfighters shoot with us and they are fun to watch. I also have to thank Yak for bringing Campo Kid down to shoot with us, this Junior shooter is fast and a great person.


Papa Dave was our Top Gun for the day, followed by Campo Kid, Sean Clancy O'Conall, Buck Dodgers and Marshall W.D. rounded out the Top 5. I think it is interesting that we had an Elder Statesman 1st, a Junior 2nd and had 9 Categories represented in the Top 10. I think that proves, at least at Wartrace, that no one Category has the best shooters.


I'd also like to welcome our newest Wartrace Regulator Buffalo Red Rock.


A Big thanks to Birdgun Quail for taking over 700 pictures.


The next match at Wartrace will be the Tennessee Wild Bunch State Championship April 30 2011.


Until next time Shoot Straight and may all your shots hit steel.

Posted by Randy Saint Eagle at 6:01 PM No comments: