We finally got a break on April 6th and had a fantastic day for a Cowboy Match, and 48 cowgirls and cowboys rode in to join the fun. We had several new to Wartrace shooters including Scrub Oak Willie and his wife Garnet Gal, Mezcal Jack, Big Jim Vaquero, Da Lightning and Diamond Gal( at least the first time in a while). We had 2 new aliases, Dirty Nerdy (the cowgirl formerly known as Dora Dufran) and Brada Tat Tat ( the cowboy formerly known as Brad Manco).

As always Whiskey Hayes wrote some fast and fun stages with no "P" traps.

Thanks also to Jersey Brat for helping with the scoring.

Sheriff Frank Canton, Fort Knox, Tombstone John and Buck Dodgers were trying to get some practice in before they head to Oklahoma for Land Run this week. If I left out anyone else heading west, I apologize.

Sheriff Frank had a rifle lay down on the last stage and Charlie Bowdre was gracious enough to loan him one for Land Run. After lunch at Bell Buckle Cafe we followed Charlie home to pick up the rifle.

Frank and I decided it was such a nice weekend we would go to Alabama on Sunday and shoot with the North Alabama Regulators. Sunday was another beautiful spring day and NAR is a great range.

I think Tuff Stuff wrote the stages and they were fun and fast and no "P" traps although we had to think a little on some of them. North Alabama is in the process of covering and adding fans to all of their loading and unloading areas, that will be really appreciated about July and August.

We were on Buck D Law and Sugah's posse along with Waco Jim, Lefty Young Gun, Toolman (Tim Allen, talk about a fitting alias) and I can't remember all the others except Graver Bill. If you've never shot with Graver Bill you need to and look at his guns, he does some awesome work.

After shooting we went down to the pavilion and had lunch while the scores were compiled.
Sidekick was the Top Gun of the day followed by Barkeep Casey, Buck D Law, Marshall TKD, Waco Jim, Six String, Graver Bill, Ben T Iron, Lone Wolf Swain and Tuff Stuff rounded out the Top 10.

Sugah was the Top Cowgirl.

If you're looking for a place to shoot on the first Sunday of the month you can't go wrong with North Alabama Regulators. For more info and Scores check out their website. 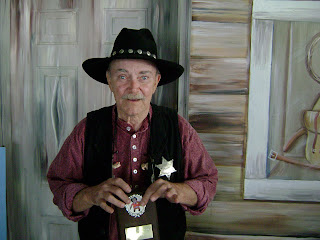 It took Frank 3 rifles to make it through the weekend.

The next match at Wartrace will be the March 20th Cowboy/ Wild Bunch Match. For more info always check out our website.

Happy Trails until we meet again.
Posted by Randy Saint Eagle at 7:57 PM No comments: