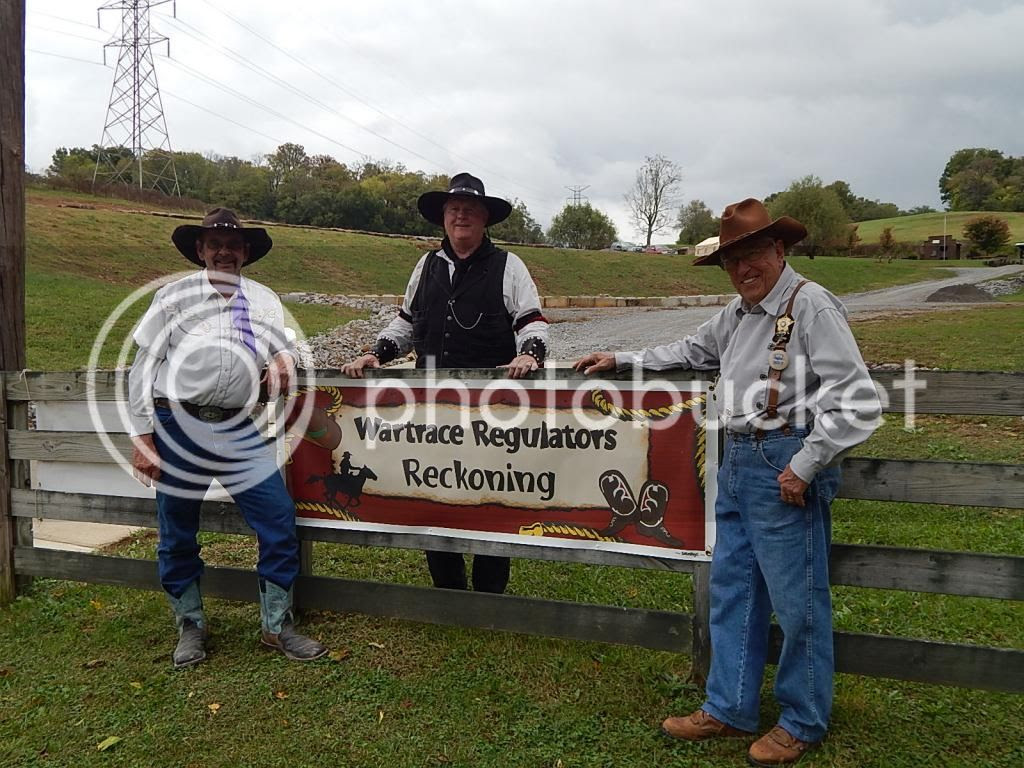 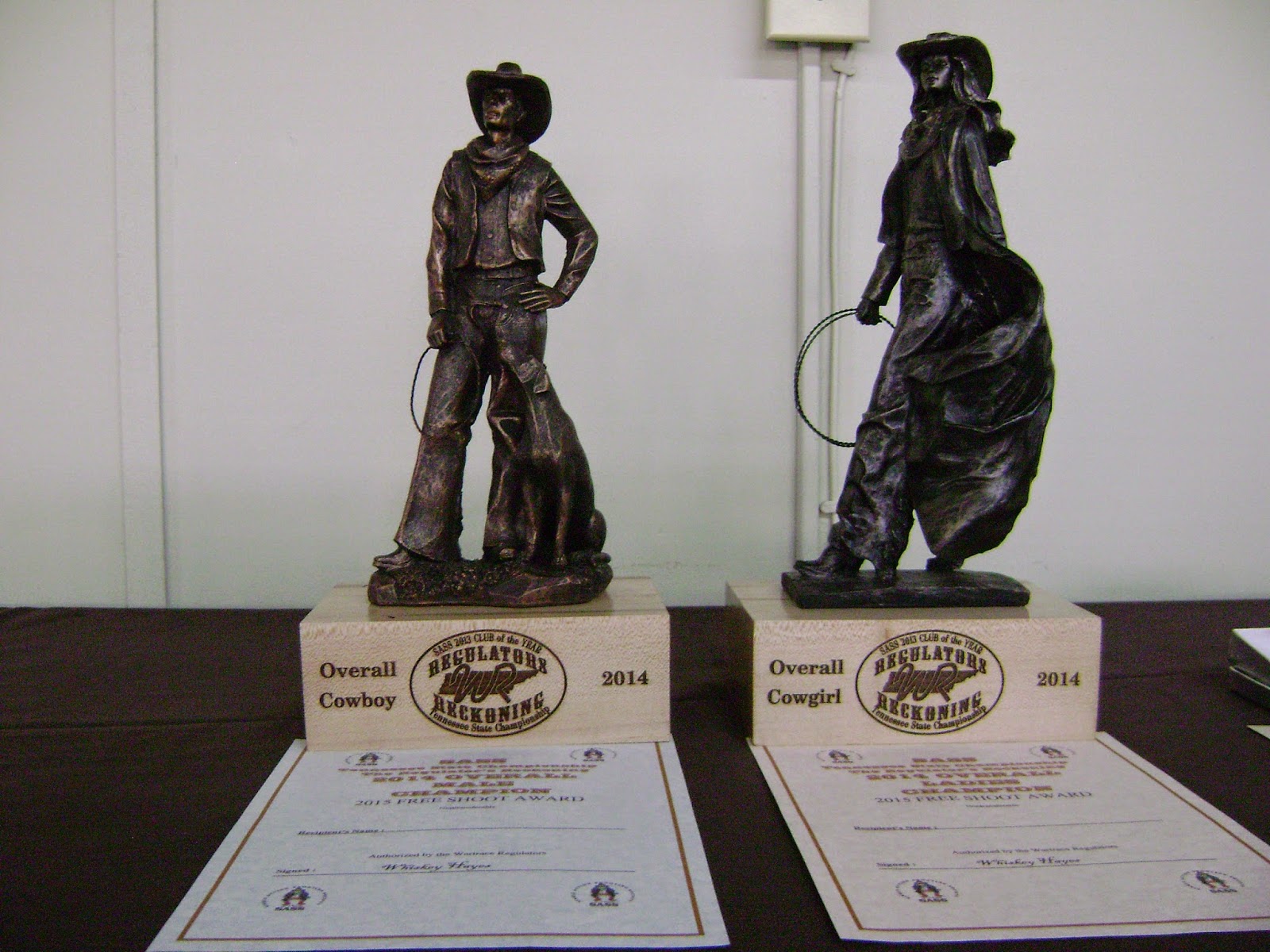 The 2014 Tennessee State Championship is in the record books and I for one think it was our best one yet. It started a little iffy weather wise with lots of rain leading up to the match. In fact it didn't stop until early Thursday morning. It was overcast and cool on Thursday for Side-Matches but the rain was gone and we were blessed with great weather for the match.

Thursday started with a Black Powder Match and a Warm Up Match, then the normal Speed events, Long Range, and Cut The Rope. Blackfish Kid managed to cut it with the first shot with his rifle and Lefty's Lady cut it with her rifle in 2 shots. In the afternoon we had a Wild Bunch Match. This is the 2nd year we've had "Are You Tough Enough To Wear Pink" on Thursday to raise money for the American Cancer Society and this year thanks to a huge $1000.00 check, from a great shooting couple who I'm sure would not want to be mentioned we raised $1141.00. Hopefully next year a few more folks will donate as well.

This year for the first time we had a Shoot-Off that everyone could enter. We had this on Thursday right after the Side-Matches ended. We offered 3 Categories based on shooting style, Traditional, Gunfighter and Duelist with these winners shooting for Overall. Prestidigitator won Traditional, Fast Harley won Gunfighter and Shaddai Vaquero won Duelist. The final round had Shaddai going against Tator with Tator being the Shoot-Off Top Gun. With the participation and number of spectators we had I'm sure this will be an annual event. Dodge City Dixie took 20 Videos of the shoot-off.

During the Shoot-Off we also had a Chili Cook-Off going on with plenty of chili and fixings for everyone to feast on. I didn't hear who won the chili contest, but all of us who stayed to eat it were definitely winners.

Friday started with Whiskey Hayes welcoming all our shooters. Papa Dave had our Safety Meeting, Whiskey offered a prayer and lead us in the Pledge. Everyone headed to their respective stages to start the match. We use Stage Drivers to explain the stages so that every Posse gets the same instructions and this system has always worked well for us.

Whiskey Hayes always writes some really good stages and these were no exception. They were all straight forward with no "P-Traps" and you could run right on the edge but you had to be careful not to run off. Several were shooters choice (rifle not last) for the gun order and some had a choice as to where you staged them. This year's stages were The Train, Depot, Wagon, Livery, Mine, Fort Sweeney, Cantina, Wells Fargo, Grafton's and the Line Shack.

After the first 5 stages were finished we had our Team Match. This year we had 11 3 person teams starting on stools, the rifle or pistol shooter ran to the staged location and fired their 10 rounds then re-staged guns and went back and tagged the next shooter. Rifle shooter had a Texas Star and a plate rack, Pistol shooter had a plate rack and 5 knock downs, Shotgun had 6 knock downs plus anything left standing. I think everyone enjoyed it.

After the Team Match we had dinner on the range, again cooked by Rolling Chopstix,  Side-Match Awards and several door prizes, including lots of Jack Daniels and several free entries to shoots. Chickamauga Slim had Karaoke going and had several folks singing different songs. Those singing including Slim, Bluff, Donald Duke, Whiskey Hayes and I'm sure others I missed.

Saturday brought on the last 5 stages of the match and another day of great fall weather. Everyone finished up in time to clean up and get ready for the banquet which was in Shelbyville this year at the Blue Ribbon Circle on the Tennessee Walking Horse Celebration grounds. The Bell Buckle Cafe catered the meal again this year and a couple we sat with from Texas said it was the best Banquet food they had ever had. Awards set-up at banquet.

One milestone we celebrated was surpassing 200 shooters for the first time. Tennessee Missy, a Buckarette was our 200th registered shooter and Dodge City Dixie prepared a couple of really nice shirts to present to her. We ended up with 227 registered and  220 to actually shoot the match. This match was also the final leg of the Triple Crown.

The awards started with recognizing Category State Champions with State Champion buckles. Then it was turned over to Mose and Bella Spencer to give awards to all of the Triple Crown Champions. They also presented a gun cart, donated by Ruger to Georgia Slick, the only shooter to shoot all 3 Triple Crown matches "Clean". Ruger also donated a gun to be given away to a lucky Triple Crown shooter.

Next we recognized the 21 shooters who shot our match "Clean". We had 2 pistols donated by Ruger, a Henry .22 donated by Franklin Gun Shop, a Holligan Wagon gun cart donated by Papa Dave and a really big Bowie Knife donated by Brada Tat Tat and Dirty Nerdy, that were given away during the awards. Then we recognized the top 5 in each category.

Lead Ringer was the Top Gun of the match, followed by Sidekick, Missouri Lefty, Fast Eddie and Unpleasant rounded out the top 5.

Gringo Gordo usually take pictures for the Cowboy Chronicle report but was out of town so HT Terry took range photos and ToyBoy Bandito took Banquet photos. They used Gringo's camera so as soon as he gets back I'll add a link to his album.

I want to thank all my old friends and the new ones I just met for helping to make this the Biggest and I think the Best,  Regulators Reckoning ever. I hope you will all be back next year.

Starting with our Nov. 1st Cowboy Match Wartrace will be back on our regular schedule until next years State Match.

For more info about our club always check out our website.

Happy Trails until we meet again.
Posted by Randy Saint Eagle at 5:58 PM No comments: