35 Cowgirls and Cowboys descended on Wartrace to celebrate our Country's Independence, and have some Cowboy Action Shooting fun. Papa Dave started us off with a Safety Meeting and next I was able to present Papa Oso with the 2014 Eagle Eye award for shooting the most Clean Matches at Wartrace in 2014. This was Papa Oso's 3rd time to win this award, he shoots lots of Clean Matches, congratulations Papa Oso.

SASS excepts nominations for a SASS Regulator badge for cowboys and cowgirls who go above and beyond to promote SASS, their home club and Cowboy Action Shooting in general. It takes a lot of signatures on a petition before SASS will recognize someone. We have 1 shooter who has been a big part in our club and in several other clubs before he moved to our area. He has also designed and built products to help cowboy action shooters and is always willing to help anyone getting started or just wanting to get better in Cowboy Action Shooting. 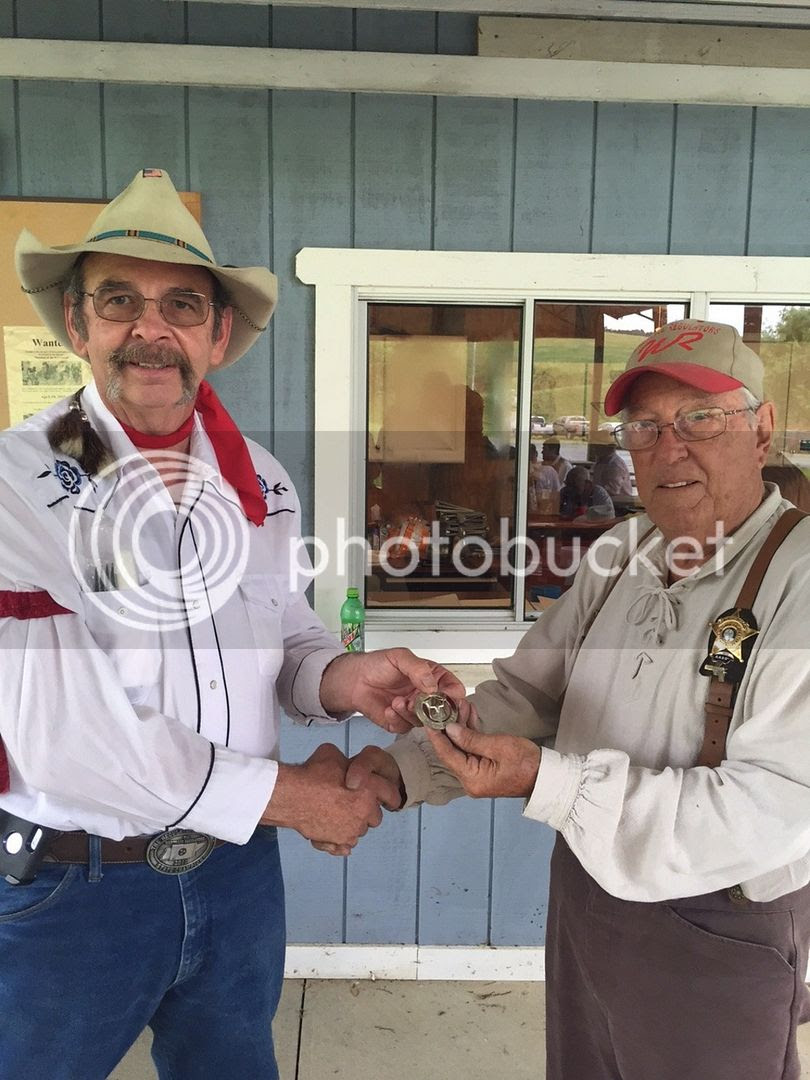 It was a great honor and privilege for me to get to present PAPA DAVE with his Regulator Badge. I'd like to thank Dodge City Dixie for getting the ball rolling on this, Amaduelist for picking up the award at End Of Trail and mailing it to me from New Mexico so I'd be sure to have it this weekend. I'd also like to thank everyone who had a part in making this happen and keeping it a secret from Papa Dave, I think he was really surprised.

This was a day of celebration and Whiskey Hayes also announced today was Blue Boy's 96th birthday, we think he is the oldest active SASS member, Blackwater and Shotgun Schoolmarm brought a cake and we celebrated with cake after the match was over.

Back to the match, after the Safety Meeting Whiskey Hayes offered a prayer and led us in the Pledge. Then the posse lists were read and we got started.

This year like last we had an exploding target to shoot, off the clock, at the Corral. Whiskey Hayes had his 9417 rifle there to shoot it with. That little .17 bullet is very accurate and fast enough to set off the Tannerite. There were a lot of big booms and a few misses but it was all just for fun.

We shot all the stages in the Old Town, Train, Depot, Wagon, Livery and Corral and all except the Wagon were Stand and Deliver. Whiskey Hayes makes sure we don't have a lot of running in the July and August Matches.

God blessed us with another good day of shooting. The weather forecast was for 60% chance of rain and all we had were overcast skies and a light sprinkle that might have lasted 5 minutes.

Dodge City Dixie was the Ladies Top Gun followed by Alchemist Belle, Doc Kay B May and TN Missy.

We had one new shooter, welcome AO Bittles.

The next match at Wartrace will be the July 18 Cowboy/ Wild Bunch Match. Some of us will be at

If you plan to shoot the Tennessee State Match book your room soon I hear they are getting scarce.


Posted by Randy Saint Eagle at 7:57 PM No comments: