10 Cowboys and Cowgirls and 10 Wild Bunch shooters had a great day of shooting. The weather was fantastic and I think everyone had a ball.


With only 10 each we had to have 1 big Posse. The scenarios were slightly different so the Cowboys and Cowgirls shot first on each stage while the Wild Bunchers worked, then we read the scenario for Wild Bunch and they shot while the Cowboy Posse worked. This worked well but made the day a little long.

We shot the same stages as the May Main Match. They were fast and fun with no "P" traps, even though I got one (brain fade).

I had a ball and I hope everyone else did. We were excited to have one new Cowboy shooter, Brad Manco, and his wife and soon to be shooter, Dora Dufran. They are also new Wartrace Regulators. We also gained 3 more new Regulators, Montana Duke, Dynamite Jim and Tioga Roy, please welcome these new Cowboys and Cowgirl when you meet them.

Papa Dave was the Top Gun for the day shooting Wild Bunch, followed by Scattergun Kid {Cowboy}, C.W. Knight {WB}, Sheriff Frank Canton {CB} and Cherohala Chase {WB} rounded out the top 5. I thought it was interesting that the top 6 alternated Wild Bunch then Cowboy.
But I have to admit the Pards with them "New Fangled" guns topped the Cowboys this day but we want a rematch next month.

Congratulations also have to go out to Ida Shot'em, Dusty Wilcox and Dobber (shooting black powder) for shooting "clean" matches.

Our next Cowboy match will be June 4, for more info always check out our Website.

These pictures were provided by Dusty Wilcox's wife Lisa, Thanks Lisa.

If you're looking for a place to shoot on Memorial weekend.
The James Gang Rides Again.
If your looking for a travel Match in June try this:

Doc Holliday's Immortals in Griffin, Georgia will host our annual
two day match on June 11th & 12th, (2nd weekend) this summer.
"The Ride of the Immortals" will feature 10 challenging but fun stages,
6 on Saturday and 4 on Sunday.

There will be team side matches on Saturday and a BBQ dinner served on the range (included with the shooter fee).
Adult Shooter fee: $35

Posted by Randy Saint Eagle at 2:34 PM No comments:

I got word back from some Regulators, that at The Last Stand, Witch Doctor said that I had better be at the Georgia State Match "or else". Well not knowing what the "or else" was I decided, along with several Wartrace Regulators to head south and see what this ruckus was all about.

8 Wartrace Regulators made the trip, after checking out Boarding Houses and seeing they were all 30 minutes or longer to the range, Buck Dodgers sent up some smoke signals and sent a few telegraphs to see if we could find a Bunk House closer to the range. All his work paid off and we found a little Bunk House within 20 minutes of the range. 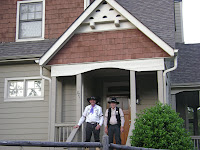 Papa Dave, Sheriff Frank Canton, Tombstone John, Branchwater Jack, Cheyenne Thornton, Buck Dodgers and I (Randy Saint Eagle) were joined by a friend from Florida, Amaduelist, at this little 5 bedroom 4 1/2 bath bunk house. Blackwater Desperado was also at the match but stayed at a different location.


Papa Dave, Sheriff Frank, Branchwater and Amaduelist got to the range early to shoot either the Wild Bunch Match or the Black Powder Match. Buck, Cheyenne, Tombstone and I got there in time to shoot the afternoon Side Matches. They had to normal speed side matches plus one of the most fun side matches I've ever tried. The entire match was based on Clint Eastwood movies and if you're a fan, you remember him shooting the Hangman's rope into to save Tuco.

This was set up where to save Tuco you had to shoot a 1/4" rope into at about 9 to 10 yards away. I'll tell you with old eyes it's hard to see that little rope. If you cut the rope it would fly up into the air so you knew right away you got it. If you saved Tuco you were given a button that said "I saved Tuco" and a piece of the rope. Mine took a place with all my badges from other shoots. Buck Dodgers turned out to be the King of rope cutting in our group. Buck cut it with his rifle and 3 different pistols, a Blackhawk, Vaquero and a Bisley.

Friday morning after the introduction, safety meeting, prayer and pledge we started the main match. We were on Posse 4 and what a great posse it turned out to be. Everyone worked and our posse ran like a well oiled machine. Buck Dodgers and Papa Dave were our Posse Marshalls and did an excellent job.

The stages were set up well and the targets big enough and close enough. Several of the stages had enough movement to keep it fun and you had to think on some to keep the shooting order straight. Several were shooters choice on gun order (rifle can't be last) and none had any "P" traps. You could tell it was a straight forward match by the fact out of 179 shooters 42 shot "Clean".

After shooting the first 5 stages they had Couples and Team matches. I had lots of fun shooting a team match with Olin Winchester (current World Champion Buckaroo) and his little brother, Joe Cartwheel. These are 2 fine shooters and you can expect to hear their names frequently.

I also got to shoot on a team with Cassalong Hoppidy and Deadly Sharpshooter, 2 more fine shooters and a lot of fun to Posse with.

Then we had a great meal prepared by the Mule Camp Cowboys with money collected going to help Storm Victims.

This is how the Wartrace Regulators finished;

Outback Steakhouse provided the meal at the Awards Banquet and Judgem' All Duncan and Witch Doctor took care of the awards.

If you missed this match you missed a good one and you should put it on your list for next year.

The Wartrace Regulators will be giving RO1 and RO2 classes on May 14.


Happy Trails to you and may all your shots "Ring Steel"

Posted by Randy Saint Eagle at 7:58 PM No comments: