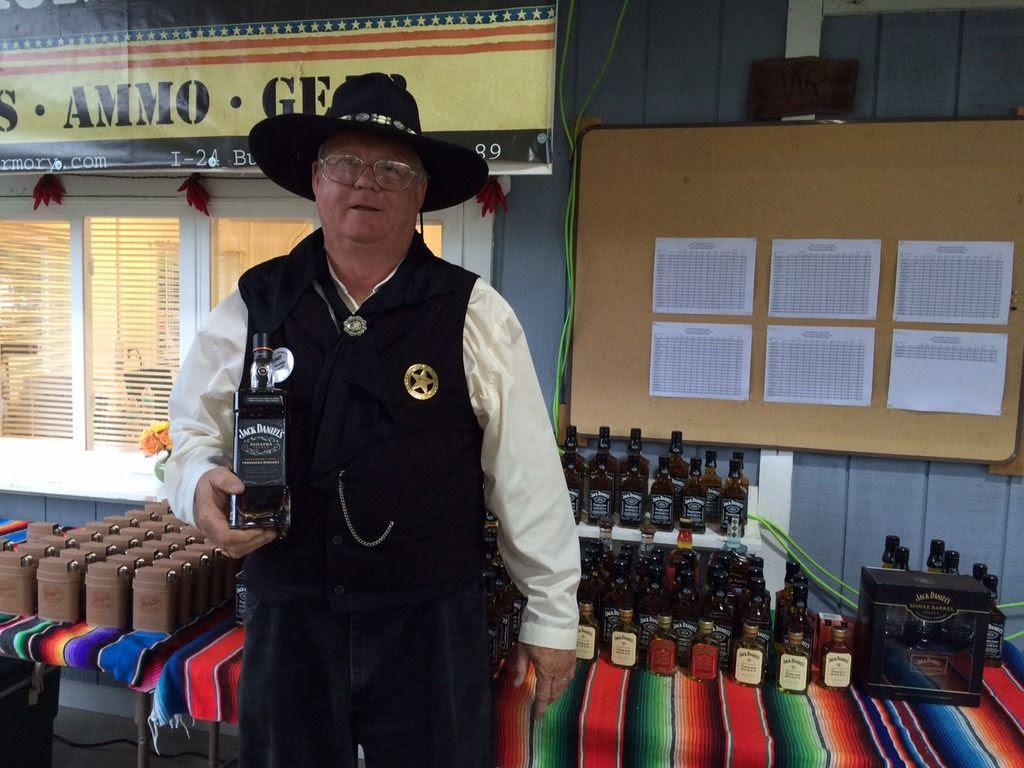 The Regulators Reckoning, Tennessee State Championship is in the books now and I think it was a good one. Preparation for this match started shortly after last years match was finished and I think all the work by everyone involved  paid off.

The match actually started last weekend for 23 of us who shot the workers shoot-thru. We shot in the rain on Saturday making it the 4th year in a row we've shot at least part of the shoot-thru in the rain.

The Side Matches started on Thursday morning to some great weather. We had the usual Speed Matches,added this year were Derringer and Pocket Pistol. We also had Cut The Rope and Long Range as well as Black Powder, Wild Bunch and Warm Up Matches. Again this years Side-Match theme was Are You Tough Enough To Wear Pink and with Mrs. Pleasant's help taking the collection jar around we were able to collect $388 for the American Cancer Society. Thank you to everyone who donated to a worthy cause.

After the Side Matches were finished we had a Man on Man Shoot-off that anyone can enter. We have the only Shoot-off I'm aware of with 3 Categories based on shooting style. We had Traditional, Gunfighter, Duelist and Ladies. Sidekick was Top Traditional, Unpleasant was Top Gunfighter, Randy Saint Eagle was Top Duelist and Shamrock Sadie was the Top Lady. These names went back into the draw for finals and when all shooting was done, Sidekick was the Shoot-Off Top Gun.

The Chili Cook-off was going on at the same time and I think CW Knight's wife Linda won it.

Friday morning started with Whiskey Hayes welcoming the shooters. Papa Dave gave the Safety Meeting, then Whiskey Hayes offered a prayer and led us in the Pledge. Then everyone headed to their stages for the first 5 stages of the match. One reason for a shoot-thru the weekend before is because we use Berm Marshall's to read and explain the scenarios. There were no changes from what the book said so if you had a plan after reading the book you could go with it.

After each posse had finished their first 5 stages we broke for lunch, prepared by Rollin' Chopstix, who also had breakfast available every morning, then we had a Team Match. Everyone who wanted to shoot put their badges in a slop jar (I told everyone it was ok it hadn't been used in awhile), 3 person teams were drawn with 1 shooting 10 pistol, 1 shooting 10 rifle and 1 with 2+ shotgun. We had some light sprinkles during Team Match but they didn't amount to much and didn't last long. The winning Team consisted of Duck River, Sixgun Schwaby and Lead Ringer. Most everyone wanted to shoot some more so we put the badges back in the pot and drew again. This time the Team of Missouri Traveler, Shamrock Sadie and Boben Weev won.

We had 24 Cowgirls and Cowboys to "Cut The Rope", Last Kiss did it with first shot from a pistol, Keystone, Llew Silverhand and Randy Saint Eagle did it with the first shot with a rifle.

It started raining about half way through the awards and continued off and on through the night but quit early Saturday morning and didn't rain anymore. The good Lord blessed us with a dry match.

Saturday morning brought the start of everyone's final 5 stages. I had to say my goodbyes early to as many as I could as I had to leave to attend the wedding of a niece. I also had to bring the awards to Cumberland Drifter and I'd like to really thank him and PeDe for setting them up at the Banquet Hall.

This years Banquet was at the recently enlarged Bell Buckle Cafe's banquet facility and I'm sure the food was fantastic as always. The Main Match Awards as well as some bigger door prizes were given out at the Banquet.

A big thank you to everyone who helped put on and run this match, if I try to list everyone I know I'll leave someone out. Most of all to everyone who came to shoot with us and made this a great one. I hope to see you all back next year.

A special Thank You to Joe Sheetz of Bell Buckle, TN who has done a fantastic job on all of our awards for the last several years.

For more information about the Wartrace Regulators always check out our


Posted by Randy Saint Eagle at 8:26 PM No comments: