We'd been hearing for awhile about Unpleasant's "Black Hat Stages", so we decided we ought to check them out. The crowd kept gathering, it looked like everybody had the same idea we did.

We ended up having 5 Posse's including a Ladies Only Posse, however I heard 1 of them ladies was right homely looking. It was really nice to see that many ladies shooting, at Wartrace we usually only have 1 or 2.

We were on Posse 2, Horseshoe John and Ocoee Red's Posse, with a good bunch of Cowboys and Cowgirl. The Black Hat Stages were as good and fast as we had heard. I think everyone there had a big time.

When all the smoke had cleared Papa Dave was the Top Gun of the day, followed by Unpleasant, Marshall W.D., Anita Margarita and Jackalope rounded out the Top 5. Papa Dave shot an awesome match and Anita summed it up well on the Ocoee Rangers Forum;

A man comes into town from out of the west, steely-eyed and well armed. We said "I reckon there's going to be a gunfight". And he proceeded to whup us all.

There were 78 shooters at this match and it ran like a well oiled machine.
I don't know about the other Posse's but we had 10 "Clean" shooters on our Posse.

It was really fun to see so many pards I hadn't seen in a while and to meet new friends. If you're in the Cleveland Tn. area on the 4th Saturday go by and visit the Ocoee Rangers, you'll be glad you did.

I'm getting old and forgetful and forgot my camera, so I don't have any pictures.

The next Wartrace Match will be Aug. 6. for more info check out our Website.

Until next time shoot straight and keep your powder dry.
Posted by Randy Saint Eagle at 5:38 PM No comments:

53 Cowboys and Cowgirls converged on Wartrace for our July Main Match. We were fortunate enough to have shooters from Alabama, Georgia and Kentucky as well as Tennessee join us. It was a great day (a little warm but much better than winter) with no rain to dampen any ones spirit.
Whiskey Hayes scaled back the movement again on the stages due to the expected hot weather. At the Gallows and Graftons we had minimal movement and only 2 shotgun knock downs at the Gallows. The Wells Fargo Bank and the Jail were both "Stand and Deliver" stages with 6 shotgun kd's at the bank. At the Depot we shot from both inside and outside.

They were some fast stages as evidenced by the fact that Campo Kid shot the 5 stage match in less than 85 seconds.

We had a few new shooters but I had to work in the morning and didn't catch all the names. I was also unable to take any pictures as I shot through once I got there.
Campo Kid was the Top Gun of the day, followed by Buck Dodgers, Randy Atcher, Sergeant Shooter and Lone Wolf Swain rounded out the Top 5.

I'd also like to Congratulate one of our pards from West Tennessee, Dew R Dye for winning Ladies Wrangler Category at End Of Trail. 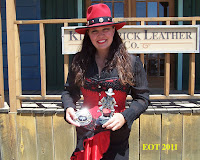 I'd also like to congratulate a young man from Kentucky who used to shoot with us a lot and still comes sometimes. Vaquero Jake 2nd Junior Boys at The World Championship.
Here is how some other pards that shoot with us on occasion finished at EOT

We had 3 Wartrace Regulators that I know of, go to End Of Trail.


We had many other friends there, I can't name them all but for complete results click on

EOT Scores
This news was sent to me by Cody Kid;
This past Friday the last and only-known picture of "Billy the Kid", which was an Upham Tin Type, Circa 1879-1880, sold at auction for $2.6 million. There were orginally four Tin Types Billy had made and gave to friends. The other three were all destroyed. I thought some of the cowboys and cowgirls would be interested in this information.
I am sorry to miss the July 2nd shoot. I'm waiting for cooler weather.
Your pard,
Ron
"Cody Kid"
Our next match will be the Cowboy/Wild Bunch Match July 16th, no lunch available.
As always for additional info check out our
WEBSITE
Happy Trails until we meet again and remember speak softly and carry a big gun.


Posted by Randy Saint Eagle at 3:26 PM No comments: