The Tennessee State Championship for 2013 is in the books now and what a fantastic one it was. This was our biggest State Championship to date and God blessed us with terrific weather for the entire weekend. We had 185 Cowboys and Cowgirls actually shoot the match.

We started on Thursday with the standard speed and long range side matches. Since this is October we had a "Are You Tough Enough To Wear Pink", "Cut The Rope" stage going on as well. We collected $322.20 for the American Cancer Society at this and donations at the Banquet. We had the Pig Iron Lane inspired target at 30 feet and you could shoot the 1/4" rope with a rifle or pistol or both.

We had quite a few shooters who were able to cut the rope with a rifle including; Asup Sleeve, Frank Buckshot in 2 shots, Cheyenne Thornton, Cassalong Hopidy, Da Lightning, Sudden Sam, JD Bullet, Mortimer Smith in 2 shots with a Spencer, Kid Nama, Fast Harley, Last Kiss, Dew R Dye, Pants A'Fire Meyer and  Harman Hammer.    Pleasant, Yankee Dutchman and I (Randy Saint Eagle) each cut it on our first shot.

We also had quite a few cut the rope with a pistol including; CW Knight, Trail Bandit, JD Bullet, Pleasant shooting duelist, Harman Hammer and Slippery Stew.  I cut one each right and left handed duelist.
I'm sure I probably missed someone and if so I apologize.

After all the shooting was finished on Thursday Chas B Wolfson and Apple Annie, who drove all the way from Arizona to shoot our match, treated everyone still at the range to Southwest Chile and pinto beans and boy was it good. We're trying to talk them into moving here so we can have it more often.

Friday Morning started out with Whiskey Hayes welcoming everyone who came to spend the weekend with us and introducing our special guests Judge Roy Bean SASS #1 and his lovely bride Justice Lily Kate SASS #1000. Papa Dave gave the Safety Meeting and reminded us that the 170 degree rule is probably the most important rule in SASS. Whiskey lead us in a prayer and the Pledge and then it was off to your respective stages to let the fun begin.

Since last year Wes Outlaw and his crew have added 5 new stages including a Cantina, The Jersey Lily, a new Fort, new Marshall's Office and a Mine Shaft and totally changed the look of the range.

Whiskey Hayes wrote some really fun and for some really fast stages . The top 3 shooters averaged under 20 seconds a stage for the entire match.

The first 5 stages were shot and 30 minutes after the last posse finished we started our Team Match. We had a Texas Star and a plate rack for the rifle, a Texas Star and 5 knock downs for the pistol and 2 kd's and anything left standing for the shotgun. Everyone who wanted to play put their badges in a hat and we drew out the teams. We had the most participation we've ever had and it was a ball. Kid Ziggy, Slick's Sharp Shooter and Pine Ridge Jack were the winning team with a time of 24.57. Thanks to all the teams that made this such a fun match. After the winning team was decided, shooters picked their own teams and no "Dream Team" beat the winning team on their first try. We had so much fun we almost missed the Friday night dinner.

Next we gave away enough door prizes that everyone present got something. Included was a SR 1911 from Ruger, a 22/22mag Heritage revolver from Franklin Gun Shop and lots of Jack Daniels Whiskey as well as stuff from stage sponsors, vendors and many others.

Saturday started off with the final 5 stages and another beautiful day.  Some Cowgirls and Cowboys were shooting some really fast times and before you knew it the days shooting had come to an end.

This year our Banquet was moved to the Tullahoma Events Center, which allowed us to raise our shooters capacity. I have always worried about moving because we always had such good food. This year the Bell Buckle Cafe catered our Banquet and to me it was probably the best food we've ever had.

After dinner we had the Best Dressed Awards and there were lots of folks dressed to the 9's. I failed to get a copy of who won the contests. Next the State Champions in each Category were announced and received their plaques. You can pick them out on the Category List on the scores page. Then we moved on to the Overall Awards.

Through the course of the night we gave away 3 guns, a Uberti single action pistol, a Stoeger coach gun and an 1873 Uberti Rifle donated by our Match Sponsor The Outpost Armory, check them out and thank them for sponsoring our match. We also gave away 325 rounds each to 3 lucky Buckaroos and a free shoot to the 2014 Georgia State Championship to Kell Raiser, complements of the Georgia Young Shooters Fund.

For those of you who don't know Missouri Lefty is a 13 year old Buckaroo, quite an impressive showing.

I only got a couple of  Photos, but Gringo Gordo took lots of pictures.

Birdshot Pete and I took a few Videos.  and thanks to Boondock Saint for the picture below. 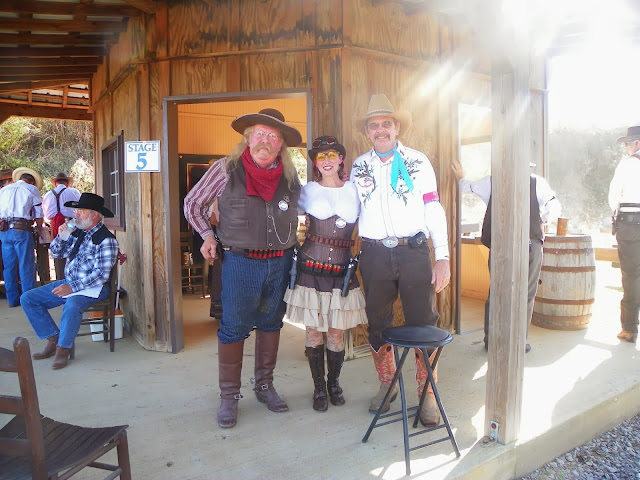 John Stokes who works with Wes Outlaw put this Video together.

Thanks to everyone who made this a great match we hope all will come back next year and do it again.

The next  match at Wartrace will be the November 2nd Cowboy Match, come and join us if you can.

Happy Trails Until We Meet Again.

Posted by Randy Saint Eagle at 9:27 PM No comments: