08 Smokeout in The Hills 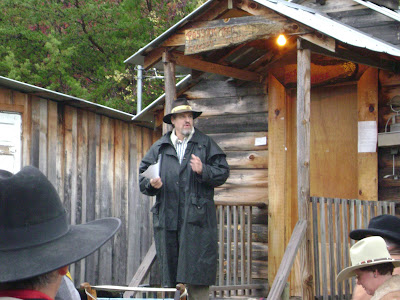 Ringer getting us started 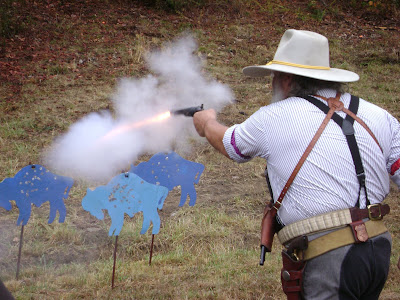 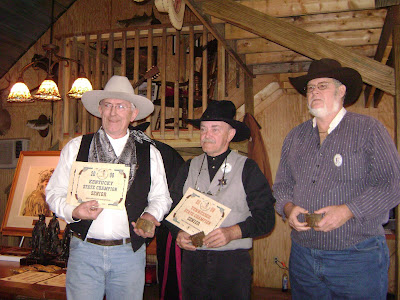 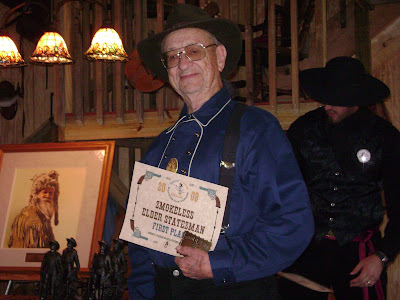 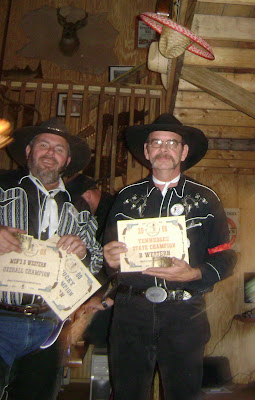 7 Cowboys and 1 Cowgirl from Wartrace decided to head up to Possum Trott for The SmokeOut
It was a really fun shoot and a cowboy atmosphere. We had a little rain on Friday for the side matches, but with covered firing points it wasn't really a problem. Saturday was a fine day and we shot 6 stages. After that we had a BBQ dinner at the Winfield Community center. Back at the Saloon Blackwater Desperado and his band entertained until the wee hours of the morning.
Sunday morning started with Campfire church, followed by the final 4 stages. I think some cowpokes were having a problem with their heads after Sat. night. After all scores were compiled, they had an Awards Ceremony. It was a really fun shoot and many thanks to Ringer, Tall Drink Of Water, Iron Maiden , Tn. Triple B, Rowdy Bates and all the gang from Possum Trott for a shoot done well. Also thanks Ernie for a good breakfast every morning.

I now have a better appreciation for being able to see your targets.
I plan to be back next year. Also thanks to Sheriff Frank Canton, Marshall Red Stockburn and Papa Dave for letting me ride and share a room with them.

Congratulations to all the Wartrace Regulators.

and most of all to our inspiration at 89

Posted by Randy Saint Eagle at 8:28 PM No comments: