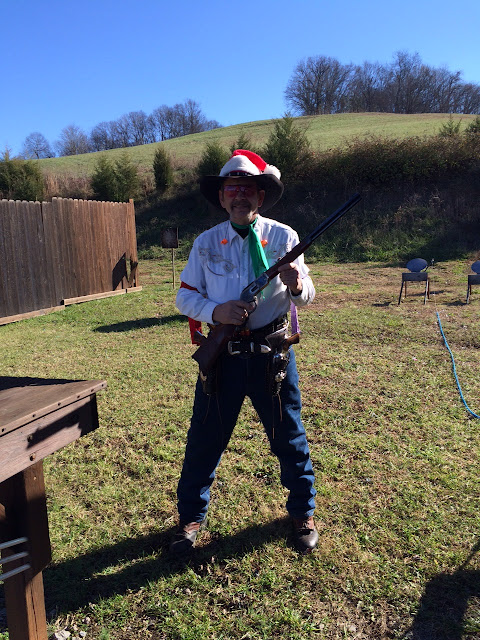 13 Cowboys rode into Wartrace for our final match of the year. No Cowgirls made it to this one and we missed them. Papa Dave started us with a brief Safety Meeting and after a prayer and the pledge we headed out to shoot.

This match was free to all who came out to join us on a really nice December day. We had sunshine, very little wind and 40's. The Cowboys shot the same stages we shot on the December 5th match and for a little twist the Wild Bunch used their 191l 's for the rifle targets also. For each stage they had to have 4 magazines minimum. Most said it felt funny walking to the line without a rifle. They all seemed to enjoy it but there were more misses than usual.

Cumberland Drifter was the Top Gun of  the day followed by Randy Saint Eagle, Grey Horse, Gun Butcher and PeDe rounded out the Top 5 Cowboys.

Frank Buckshot was the Wild Bunch Top Gun and he was Clean up to the last stage. Frank was followed by CW Knight, Dobber and Papa Dave.

Wartrace Membership dues are due Jan.1 so for any information about renewing or joining check out this link.

The next Cowboy Match at Wartrace will be Jan. 2nd and hopefully we'll be as lucky with the weather as we have been the end of this year. For more information about Wartrace and Cowboy Action Shooting always check out our website.

Until we meet again, Merry Christmas to all and to all a good night.

Posted by Randy Saint Eagle at 9:46 PM No comments:

29 Cowgirls and Cowboys rode into Wartrace to help restore Law and Order. Since Sheriff Frank Canton retired we haven't had any official law in town. It was a beautiful day for December, about 40 when we started shooting and around 60 when we finished. When you combine this with sunshine and no wind it was great.

Papa Dave started us out with a brief Safety Meeting, Whiskey Hayes welcomed everyone, Jagged Rock offered a Prayer and led us in the Pledge. The posse lists were read and we headed out to shoot. This month we're shooting Wells Fargo, Cemetery, Grafton's, Line Shack and The Gallows.

We had one first time at Wartrace Shooter, Maddog McCoy who said he though he could come 600 miles from his home range and not be recognized but a couple of us recognized him right away. It's really hard to go unnoticed with a white holster rig.

I had a a pretty good day, I started with 1 miss at Grafton's, ran decent at the Line Shack and then had a train wreck at the Gallows. I jacked out 2 rifle rounds and then missed a pistol shot. I got back on track at Wells Fargo and the Cemetery was my best stage. Here we had 2 rifle,5 plate racks, 2 pistols targets and 2 shotgun kd's. Gun order was shooters choice, rifle not last. At the beep knock down the 10 rifle plates(any left standing can be made up with rifle or shotgun), 2 shotgun kd's, then with the pistols 4 on P1, 5 on P2 then 1 on P1, I ran this stage in 16.72 seconds.

Frank Buckshot, Gringo Gordo, Hopalong Mac, Papa Oso, Scrub Oak Willie, Tabasco Jot and Whiskey Hayes all shot Clean Matches. We give out an Eagle Eye award for the Wartrace Regulator who shoots the most Wartrace Matches Clean and there is only one match left this year to decide it.

The next match at Wartrace will be the Long Range, Dec 12 instead of the usual 4th Saturday due to Christmas. The next Cowboy match will be the Cowboy/ Wild Bunch match Dec. 19, for more info always check out our website.

Until we meet again;

Merry Christmas and God Bless us one and all.

Posted by Randy Saint Eagle at 4:08 PM No comments: