Hailstorm Heather ready to start at the corral 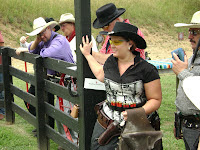 Duck River blazing away at the Corral 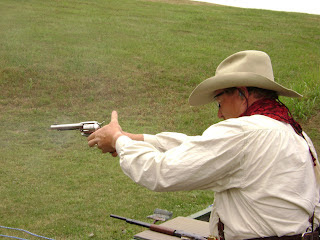 Smokin' Six Guns at the Corral 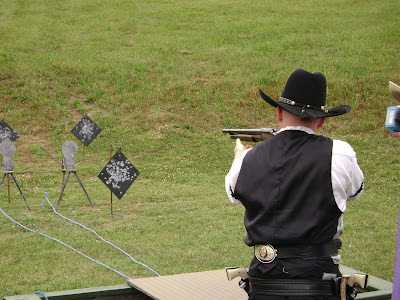 We had a good mid month shoot , the crowd was down to 25 shooters, I guess rain in the forecast didn't help any. The weather turned out GREAT, no rain. With 2 posse's and only 25 shooters everyone was pretty busy.
Duck River and I decided to go to the Bell Buckle Cafe after the match, that was a mistake. The RC Cola and Moon Pie Festival was going on. We paid $5.00 each to park and then found out they had a 2 hour wait at the Cafe. We thought we could find something from an outside vendor, so we decided to wander around for a while . We found a Bar-B-Que place with not much of a line, but when we got up to it we found out why. They were out of food.
As we were leaving Bell Buckle we had 2 different groups of ladies come up and ask if they could have their picture taken with us, maybe we'll be in some famous persons photo album some day.
I've tried to upload pictures to this , but I'm having a lot of problems with it, so if anyone would like to see pictures from the match just e-mail me and I'll send you a Kodak link to them.
rws2700@comcast.net
Shoot straight and may all your bangs end with a clang.
Posted by Randy Saint Eagle at 4:24 PM 1 comment: