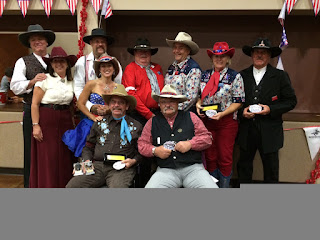 Last Thursday morning I hitched up the team, loaded the wagon and headed to Tombstone John's homestead. Once we loaded his gear we headed out to Sparta, Illinois to the first SASS Central Divisional Championship.

We rolled in just after noon and unpacked our gear and ran into Dodge City Dixie and Reno Mustang who had just finished the Warm-Up Match. We  headed to sign in when Mose drove by and said he needed me to go through the Posse Marshall walk thru, so while John checked in I did the walk thru. After finishing I met up with John to shoot some side matches. Mose also had some 5 Stand going on but I didn't make it to that. After the Side Matches were finished we met up with Jailbreak Jake and headed to, I think it was called, Southside Ribs for dinner.

Friday Morning we met up with Dirty Nerdy, Brada Tat Tat, Dodge City Dixie, Reno Mustang,C W Knight, Garnet Gal and Scrub Oak Willie, for the Opening Ceremonies. All together there were 10 of us from Wartrace and we were split on 3 separate posses. We were treated to a harmonica rendition of the National Anthem and I'm sorry to say I cant remember the Cowboy's name who played it. Mose offered a prayer and we headed to our starting stages.

John and I were on Posse 3 consisting of  Digger Mike, Garnet Gal, Hondo Tucker, Jailbreak Jake, Jimmy Reno, Kid Ziggy, MoBetta, Panhandle Ranger, Randy Saint Eagle, Reno, Scrub Oak Willie, Shadow Kid, Stroud (our Posse Marshal), Tombstone John and Travelin' Kid. There was only 15 of us but we had a great Posse, everyone worked and all jobs got done without any problems.

Our posse shot the first 5 stages on Friday, they were pretty straight forward with a fair amount of movement and one Stand and Deliver stage. I had 2 misses on day 1 and slipped the hammer and had to go all the way around once with a pistol but all in all I felt ok for the day.

Mose always has something interesting and after the 5 main stages he had a Man on Man where you finished with a dueling tree and a shotgun and as many shells as you wanted to bring. I got beat in the first round but I shot so many times I could hardly touch my shotgun.

Next we had a Team Match where 5 person teams played Horse, if one person made a shot the other teams had to make the same shot or get a letter. The hardest shot I personally had to make was a left handed rifle shot because I can't close my right eye without my left one shutting as well. It was very hard to get my head far enough across the stock to sight with my right eye but I finally did it and made the shot. The most interesting shot was by Shamrock Sadie doing the Annie Oakley shot with a rifle sighting through a mirror. Sadie made the shot but so did Six Gun Schwaby for our team. In the end our team consisting of Six Gun Schwaby, Lead Ringer, Longshot Seth, Blastin' Brad and myself won the Team Match.

Friday night we had a Cowboy Carnival with lots of carnival games to play and corn dogs, curly fries and ice cream to eat. There was a stretch raffle with lots of stuff including several guns.

Saturday morning our posse shot stages 6 thru 10 and some of them had a little more movement but  all were fun. I struggled more on Saturday with a couple of shotgun make-ups, slipped the hammer on 2 shots and had to go around, and jacked out a rifle round on 2 stages with a pistol miss also on one of them. My only good stage was our last stage, 7, and it went well.

Saturday night was the Banquet and awards and we started with some really good turkey, ham and all the fixins. Next were the side match awards and I was lucky enough to win the Speed Shotgun Double Barrel with a 9.28 on 7 targets. There were several more guns given away throughout the night.

After everything was over Tombstone John, Dirty Nerdy, Brada Tat Tat, Dodge City Dixie, Reno Mustang and I had to go to the DQ for ice cream, we missed you Papa Dave.

If you missed this years Central Divisional Championship you may want to start planning for next years now because you missed a good one. Thank you to Mose, Bella and everyone involved in putting on this match.

The Tennessee State Championship, Oct. 8-10 is fast approaching so get your entries in soon if you haven't already. Motel rooms are getting hard to find so contact me if you can't find one.

The next match at Wartrace will be the Sept.5th Cowboy Match, always check out our website for more info.

Happy Trails until we meet again.
Posted by Randy Saint Eagle at 9:12 PM No comments: