A week ago, Sheriff Frank Canton and I loaded up my buckboard and headed to the North Alabama Regulators range in Grant. We met up with Papa Dave, Cumberland Drifter, Wild Jill Hickok and Duck River. Whiskey Hayes met us at the range and we joined up with Alchemist Belle, Branchwater Jack and some of the NAR shooters for their workers shoot-thru. They had some good fast stages with no "P" traps and I really enjoyed shooting them.

Ambush this year was the last leg of the Triple Crown of Cowboy Action shooting. Several of us were in the Triple Crown and I have to say a big Thank You to Lick Skillet Charlie for setting it up so we could shoot their workers shoot-thru. Their regular match is the same weekend as our workers shoot-thru so this was the only way we could do it. The North Alabama Regulators had enough members show up so the shoot-thru posse didn't have to do any work, just shoot. This was a great help when you shoot 10 stages in one day.

Duck River and I went up for the side matches on Friday and met up with Alchemist Belle, Branchwater Jack, Tom Horn, Dodge City Dixie, Reno Mustang, CW Knight, Ben T. Iron and Da' Lightning. Those of us that shot the Triple Crown got free side matches and two free lunches. I couldn't make it to the Banquet Saturday night due to shooting 10 Stages at Wartrace so I'm not sure what anyone else did in side matches but Duck River won Men's Traditional Wild Bunch and I won the Duelist 3 gun.

I went back to the Award Ceremony today and got there in time to watch part of the match. It's really amazing to watch some of the top shooters shoot, I can't count as fast as some of them can shoot. At the award ceremony Mose and Bella recognized the Triple Crown Winners. The Triple Crown helped boost the number of shooters to 219 this year.

The Wartrace Regulators did very well :

If you were at Ambush you know what a good match it was if you weren't you missed a good one. If you're looking for a good match the first weekend in October check this one out.

Complete Scores when available can also be found at the above link or on the ACES website.

We all need to promote youth in this great sport as we are an ageing  group as proven by the fact that Silver Senior was the largest Category with 25 shooters. If you have an opportunity try to get your children or grandchildren involved.

Once again I'd like to thank Mose and Bella for the Triple Crown and all of the Alabama Regulators and everyone else involved in Ambush at Caverns Cove for making this a Great Match.

I got very few pictures but here is a link to them.

I also got a few Videos.

Classic Impression was the pro photographer and will probably have photos posted soon.

Thanks Sugah for taking pictures throughout the entire event, once she gets them together I'll add a link. here is one of the Wartrace Triple Crown Winners that were present. 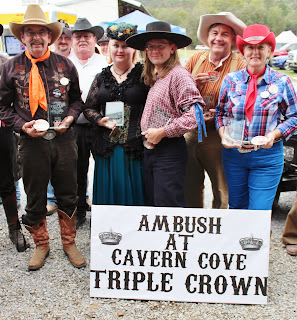 Here are all the Triple Crown present.

Don't forget the Tennessee State Championship is this weekend and it will be our biggest one ever.

Happy Trails until we meet again.
Posted by Randy Saint Eagle at 7:42 PM No comments: