Whiskey Hayes set up The World Record Stage at the Corral so we could see how we did against the current World Records. All current records can be seen on Doc Shapiro's Website.
A few of us tried the stage after our August Monthly Match. We had pretty good luck with it. 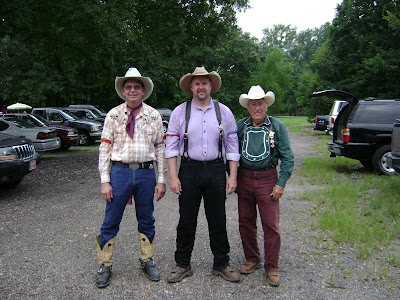 ROAD TRIP!!
Buck Dodgers, Papa Dave, Tombstone John and I went to Memphis to shoot their monthly match and boy was it hot!!! This was probably one of the hottest Saturdays this year.
The Gunslingers put on a great match as always. 35 shooters came out and braved the heat. The stages were fast and fun, but at least one made you think some and on that stage I was the first shooter on our posse. It was a Degressive Sweep on just 2 targets. That was the first time I had seen that but I expect I'll see it again.
Congratulations to the Top Five Shooters, Prestidigitator, Papa Dave, Locco Perro, Buck Dodgers and Blackfish Kid.
I thought it was interesting that the top shooter is about 18 and the number 2 shooter is 74, covers a pretty broad span.
Mountaineer Lefty told us they have 146 shooters signed up for the State Championship right now, so if you want to shoot and haven't signed up you better hurry.
Tennessee State Championship Info
The Gunslingers are building covered loading and unloading areas and running electricity for fans, the fans really helped Saturday. Due to the small posse I wasn't able to take very many pictures, but I have a few.
If you're ever in the Memphis area go and check out The Memphis Gunslingers.

Posted by Randy Saint Eagle at 5:42 PM No comments:

53 Cowboys and Cowgirls braved the heat to come to Wartrace for our August Main Match. It was hot but we had an occasional overcast sky that helped some.
In spite of the heat Tombstone Peacekeeper and CW Knight managed to shoot clean matches, Congratulations Cowboys.
I'd like to blame it on the heat, but I think it was CRS instead, I got one of the 15 Procedurals That were given during the day. Thats two for me in two months, I'm going to have to do better.
Whiskey Hayes did a good job again of setting up fast and fun stages.
Buck Dodgers, SA Pondwater, Tombstone Peacekeeper, Will Reilly and Duck River were the top 5 Cowboys and will make up the Shootist Category next month.
Birdgun Quail was wanting the True Grit award because he had a splinter in his finger and a mosquito bite, he thought that took a lot more grit than Two Moon Shining shooting in a back brace. We may have to give him an award just to stop the whining.
Once again thanks to Shotgun Schoolmarm and Annie Marlin for doing the registration and scores.
Come on out and join us for the Mid-Month Match Aug. 15 and our next Main-Month Match Sept. 5
SCORES

Posted by Randy Saint Eagle at 2:41 PM No comments: