2013 has been a cold year so far and we've had to cancel 3 matches. Yesteday we had a make-up match and for early March the weather was pretty nice.

Charlie Bowdre discussed the new range improvements and if you haven't been here for a while the old fort and jail have been torn down. Starting just past Wells Fargo Bank will be a Mexican Cantina, a Judge Roy Bean "Law west of the Pecos" stage, an open stage where we can set up and change things as needed, a Marshall's Office and Fort Sweeney. He also mentioned if anyone would like to sponsor the construction of a stage and have their name on it to contact him. There is a lot of work to be done between now and the State Match, but once completed you'll be able to start at the Gallows and go straight down the line for 10 stages.


39 cowboys and cowgirls rolled into Wartrace for a great match. Whiskey Hayes wrote some fast and fun stages and Papa Dave was the subject of all the scenerios. I can't remember all the story lines but at Grafton's he was accused of selling rotgut whiskey in Jack Daniels bottles and at the Cemetery he was called a "Lyin' kerr dog". We had a lot of fun reading reading the stages and picking on Papa Dave. As always Whiskey had a lot of variety on the stages with gun order being shooters choice on several as well as starting location being optional on a couple. For good measure he threw in a couple of smaller than usual pistol targets at Grafton's, you might need to aim on these.

It was to good see several of our Alabama pards make the trip up to join us. I also really enjoyed watching Joe Dirt and Hatfield shooting Outlaw. Outlaw shooters are a hoot to watch and Joe Dirt has less shotgun make-ups from the hip than I do aiming.

Dobber put on a Long Range Mini-Match after the main match but I don't have the results.

I'm not currently able to make slideshows in Photobucket so this is the only still picture from yesterday. 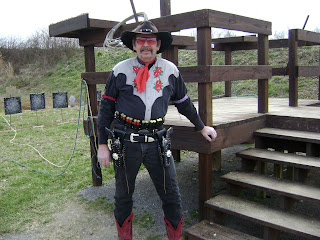 Buck Dodgers brought a friend, Nathan, out to see what we do and I'd like to thank Nathan and Tombstone John for helping me take videos, here is a link to 25 videos from the match.
Videos

Deadwood Miner had a knee replacement done a few weeks ago so he won't be shooting with us for a while. I talked to him last week and I think his recovery is going well. I didn't ask if he had any bionics added but I'm sure when he gets back he'll be faster than ever. Good luck Deadwood I wish you a speedy recovery.

Tombstone John, Buck Dodgers, Nathan and I made a run to the Bell Buckle Cafe for a late lunch and it was good as usual, if you haven't tried it be sure to try their oatmeal cake with warm caramel sauce, I think you'll like it.

The next match at Wartrace will be this Saturday March 16, Cowboy/Wild Bunch Match. Safety meeting at 9:30 for more info always checkout our website.

Happy Trails, until we meet again.
Posted by Randy Saint Eagle at 4:46 PM No comments: