14 Wartrace Regulators headed west to help out T-Bone, Ringo "By Gawd" Fire, Nuttin' Graceful and all the Dooley Gang and friends in a range war called Comin' At Cha, at The Badlands Bar 3 Ranch, The SASS Southwest Regional in English Texas. 389 Cowboys and Cowgirls came to join in on the fun and many others came just to watch. 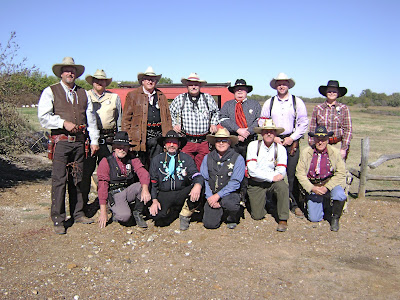 The Wartrace Gang except Blackwater and Hatfield
We hitched up the wagons and headed out before daylight Wednesday morning and got to our bunkhouse ( The Best Western of Paris Texas) well after dark. We were just in time to grab some chow next door before they shut down for the night.
Thursday morning we made the 45 minute drive to the range and tried to find a place to park our covered wagon. They had a big rain Tuesday and Wednesday and had to make do without one of their main parking areas on Thursday. Nuttin' and Dewey Cheatem did a great job of finding us a place.
We had the usual side matches Thursday afternoon and had a chance to get familiar with the range set-up and targets. If you want to see some amazingly fast shooting go to the side matches at a match this big. Plenty of these cowpokes can shoot faster than I can count.
We had the morning shift on Friday and had to roll out pretty early to get to the range on time. The temperature was in the low to mid 30's at shooting time, but warmed up to the mid 60's.
The Stages were fast, fun and in your face, plenty close enough to get over confident and exceed your speed limit. We shot stages 1 thru 5, and with only 1 "Stand and Deliver" stage there was enough movement the help you warm up, but not enough to wear you out. The most unusual stage of the day for me was Stage 5 "The Texas Chicken Ranch" all rifle, including a reload, and pistol rounds had to go through the State of Texas cutout in a large target and not ring any steel. If you had a "ding", it was a miss, many ran this very fast, a few too fast and hit the target.
Saturday we had the late shift, so we slept in and got to the range by mid-morning. Plenty of time to check out all the vendors including Blackwater Old West Mercantile with Blackwater and Hatfield (Wartrace Regulators). Then get an early lunch before shooting in the afternoon. It was much warmer Saturday when we started shooting, but I started the day with a rifle that didn't want to cooperate and had my slowest stage of the match and my only miss. The last 5 Stages were just as fast and fun as the others. 2 of my favorite were Stage 9 the "Outback Steakhouse" where you shot your rifle down the hall before grabbing your shotgun and shooting out 2 different doorways, then placing your shotgun on a table in the 3rd door and shooting both pistols out that door and Stage 6 the "Big Wagon". I shot my best stage here finishing 18 overall on this one. Did I tell you this was a "BIG" wagon, 15' or taller I'd guess. You triple tapped 3 very big buffaloes with your rifle reloaded 1 round and shot a gong out beyond the buffs, then you did a 5 shot "Nevada Sweep" with your shotgun, no pistols on this stage.
After finishing the match we packed up the covered wagon and got ready for the awards banquet held on the ranch. Outback Steakhouse had a good steak for us before the awards started. The banquet theme was the Roaring 20's so we saw lots of interesting costumes. T-Bone knows how to keep the ball rolling so we were out and watching the fireworks show over the lake by 9pm.
Texas Rick O'Shay was the Top Gun and Half A Hand Henri was the Ladies Top Gun.
Here is how the Wartrace Regulators finished;
Buck Dodgers 4th Wrangler 19th Overall
Papa Dave 1st Range Boss 51st Overall
Duck River 2nd Frontier Cartridge 64th Overall
Randy Saint Eagle 6th B-Western 72nd Overall
CW Knight 6th Senior 87th Overall
Scattergun Kid 3rd Frontier Cartridge 107th Overall
Jailbreak Jake 8th Duelist 138th Overall
Sheriff Frank Canton 14th Silver Senior 183rd Overall
Tombstone John 15th Senior 197th Overall
Charlie Bowdre 11th Elder Statesman 216th Overall
Wes Outlaw 17th Duelist 255th Overall
Hatfield 15th Cowboy 269th Overall
Wild Jill Hickock 9th Ladies 49r 286 Overall
Blackwater 12th Frontiersman 375th Overall
I think it's pretty impressive for a small club in Tennessee to have 14 members go to Texas for a match. I think we all had a really good time. My only complaint is next time I won't stay so far away from the range.
COMPLETE SCORES
Posted by Randy Saint Eagle at 5:21 PM No comments: