On Saturday Feb. 20, 12 Wild Bunch and 5 Cowboy shooters got together to try to rid Wartrace of bushwackers, horse thief's, crooked lawmen and injuns. It turned out to be a beautiful sunshiny day with temps passing 60 degrees, it was by far the best weekend we've had in 2010.
Papa Dave wrote some good stages, nothing too complicated and most had enough movement to keep it interesting. It was especially fun to shoot the Texas Star with our 1911's. Many of us found that we should zero our auto's to find out exactly where they're hitting, Texas Star plates are a lot smaller than what we usually shoot. The misses on the star had everyone laughing, but Papa Dave wrote the stage where we could clean up the star with our scatter guns if needed, so no one had a miss on the star.
The weather was so nice I hated for the day to end, this would have been a great day to shoot 6 stages.
In the end Duck River was the top shooter of the day shooting Wild Bunch Open, Papa Dave allows 3 Wild Bunch Classes, Traditional and Modern, per SASS rules, and Open which permits any semi-auto except .22 cal. and any SASS main match rifle. That way folks who shoot .38's can still compete without having to buy a new rifle.
Marshall Red Stockburn came in 2nd shooting Wild Bunch Modern.
Congratulations to Crooked Penny and Rockwood Ranger for shooting clean matches.
Complete Scores or check out The Wild Bunch Page on our website.
I was disappointed that we didn't have a better turnout on such a great day, hopefully we'll have just as good weather for our March Cowboy Match, March 6 2010 I hope everyone will make plans to attend that match.

After the match I decided to make a trip to one of my favorite places in Bell Buckle, Designz By You. Joe Sheetz can do some great things with his Laser. I decided to see what he could do with my shotgun stock, it already had some checkering, but I wanted to add something else. My daughter had already made me a Randy Saint Eagle logo for my cards, so Joe modified it some and laser engraved it into my gun stock. It turned out great, I would urge everyone to go by and see what Joe can do. His rates are very reasonable and the quality is excellent. 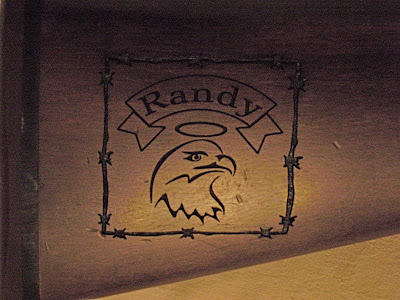